Swiftwater Cellars sources its grapes from some of the premiere vineyards of the Pacific Northwest. Our goal is to identify the best grape varieties from premiere viticultural sites and make them part of our program.

Swiftwater primarily sources its wines from American Viticultural Areas (otherwise known as AVAs) in the local Washington and Oregon region. Sourcing from selected vineyards of certain AVAs allows us to consistently produce wines with balanced complexity and high quality. 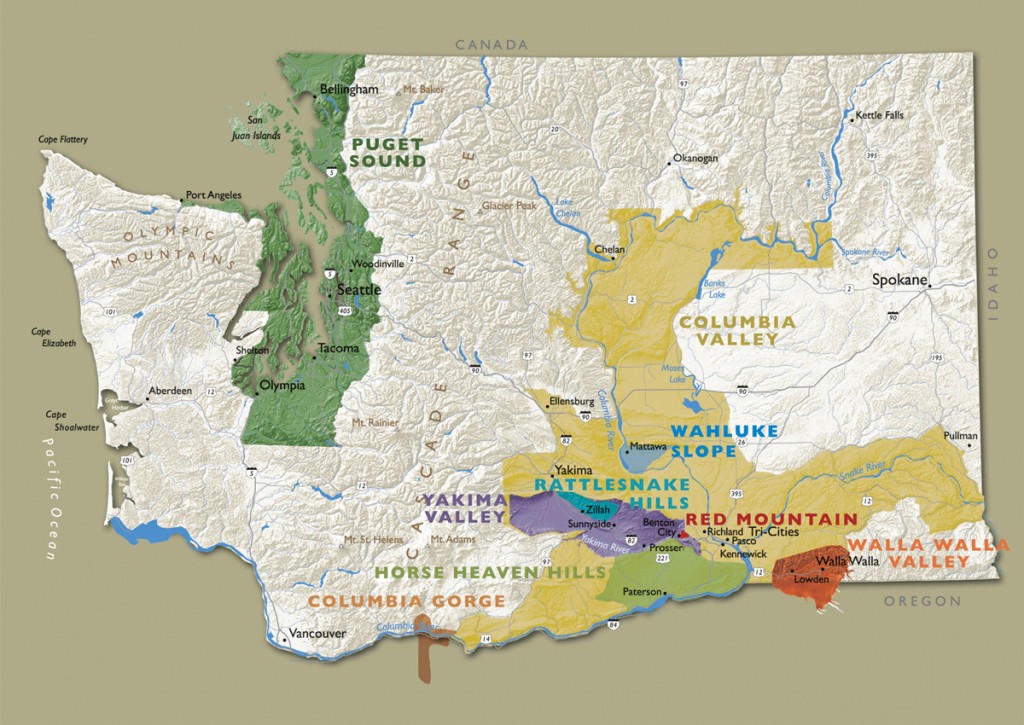 The Columbia Valley is home to over 99% of all of Washington’s vinifera acreage. Cabernet Sauvignon is the most planted grape followed by Merlot, Chardonnay, Riesling, and Syrah. However, over 30 vinifera varieties are currently planted in this region.

The Wahluke Slope, named after a Native American word for “watering place,” lies in south-central Washington. The area is geographically isolated, bordered by the Columbia River, Saddle Mountains, and Hanford Reach National Monument.

As one of the warmest regions in the state, the Wahluke Slope is known primarily for red grape varieties, particularly Cabernet Sauvignon, Merlot, and Syrah. Wahluke Slope wines tend to be ripe and full-bodied with pure varietal fruit flavors.

Cabernets are notable for black cherry and cassis aromas and flavors. Merlots display red fruit, such as sweet cherries, red currants, and raspberries as well as notes of chocolate. Syrahs tend to display dark fruit, such as blackberries and blueberries, although some also display abundant savory notes.

Some of Washington’s cult favorite wines are produced from Cabernet Sauvignon grapes grown in this AVA including the 2002 and 2003 Quilceda Creek Vintners Cabernet Sauvignon, which scored the rare 100 point rating from Robert Parker’s The Wine Advocate. Only 15 other wines in the US have received this designation, all made from California grapes. Only five other previous vintages have received consecutive perfect scores in The Wine Advocate’s publishing history. The Quilceda Creek wines were composed of blends of grapes from three Red Mountain AVA vineyards and one Horse Heaven Hills AVA vineyard.

World class wines produced from grapes grown in the Red Mountain AVA have brought attention and acclaim from wine enthusiasts to this small but prominent agricultural region of Eastern Washington. The Red Mountain vineyards continue to attract international interest as the grapes produced in this area are highly desirable and increasingly in demand.

Growers commit their best efforts to cultivate the powerful and concentrated fruit that Red Mountain gives them, and they are wholly united in their belief of the superior quality of Red Mountain grapes in the craft of winemaking

The rebirth of the Walla Walla wine industry occurred in the 1970s when Leonetti Cellars was founded on one acre (4,000 square meters) of Cabernet Sauvignon and Riesling. The winery gradually expanded and achieved worldwide recognition as it became one of Washington’s most sought-after cult wines. The founding of Woodward Canyon Winery in 1981 and L’Ecole No. 41 in 1983 added to the area’s visibility in the wine world and the appellation was granted AVA status in 1984.

In recent decades, the valley has become a major wine producer, with multiple American Viticultural Areas of its own. With a cooler climate than California, the gently rolling hills surrounding the Willamette are home to some of the best (and most expensive) Pinot noir in the world, as well as a high-quality Pinot gris.

When you’ve made the highly passionate decision to spend your life making wine, you may think you have an inkling of the difficulties it will present. But when you’ve decided to make pinot noir, with its hundreds of clones and fickle sensibilities, you had better be passionate about your pursuit.

It helps to be working with grapes from the Willamette Valley. And if you’re truly fortunate, you might be working with grapes from the Eola- Amity Hills AVA, where the ocean winds blow in through the Van Duzer Corridor and cause even the locals to keep their Pendleton blankets out well into July. That cold air makes the vines work harder and amplifies pinot’s already lush and aromatic qualities.

But rest assured, it’s a battle.
Do you wait longer for more ripening and flavor and risk autumn rains taking half of your crop, or do you pick early and count on a miracle in the barrels?
People who make wines here are as tough and stubborn as the vines themselves. They work hard. They take calculated risks. They suffer for their art. And they make wines that have rocked the world, quietly. Because unless you’re a critic, you want to keep something this good a secret as long as you can.

Just 28 miles south of Portland, the Dundee Hills American Viticulture Area (AVA) encompasses 6,490 acres. Some 15 million years ago, lava flowed from Northeast Oregon into the Willamette Valley, covering all but the highest peaks with up to 1000 feet of basalt.

The colossal Missoula Floods of 10,000 – 15,000 years ago deposited a blanket of rich sediment on the lowlands, sparing the original red volcanic hills above the 200 ft. elevation mark around the town of Dundee. Today, the 200 ft. contour line defines the Dundee Hills AVA.

The Chehalem Mountains were formed by uplifted sedimentary seabeds, lava flows, and wind- blown silt, resulting in some of the most diverse soils in wine country. This geological miracle serves as a laboratory for winemakers and consumers to explore the interaction of soils, terrain, elevation and climate – and their contribution to outstanding wines.

The estate vineyard is located about 8 miles northeast of Carlton in the heart of Yamhill County’s Ribbon Ridge viticultural area, and is the sole source for Ribbon Ridge Vineyard’s flagship Estate Pinot Noir.

The McMinnville AVA lies due west of the town of McMinnville in the Coast Range Foothills of Yamhill County. This AVA is geologically and climatically very different from any other in the Willamette Valley. Geologically, the soils in the McMinnville AVA are the oldest and most complex of any Oregon AVA with a combination of marine sedimentary soils and basalt. The soils in our AVA were created during the Eocene period 38-55 million years ago and were the result of a

combination of Cascade Mountain lava flows and tectonic plate movements that created the Coast Range Mountains. The plate movement exposed ancient and weathered soils in the foothill regions where our AVA is located and the lava flows created ‘basal lava fingers’ which can be seen amongst marine soils in the McMinnville AVA vineyards. The soils are primarily uplifted marine sedimentary loams and silts, with alluvial overlays. Beneath is a base of the uplifting basalt. Clay and silt loams average 20-40 inches in depth before reaching harder rock and compressed sediments, shot with basalt pebbles and stone. The uniqueness of the soils for winegrowing is in the 20 to 40 inch depth.

You can find out more about which cookies we are using or switch them off in settings.

This website uses cookies so that we can provide you with the best user experience possible. Cookie information is stored in your browser and performs functions such as recognising you when you return to our website and helping our team to understand which sections of the website you find most interesting and useful.

Strictly Necessary Cookie should be enabled at all times so that we can save your preferences for cookie settings.

If you disable this cookie, we will not be able to save your preferences. This means that every time you visit this website you will need to enable or disable cookies again.